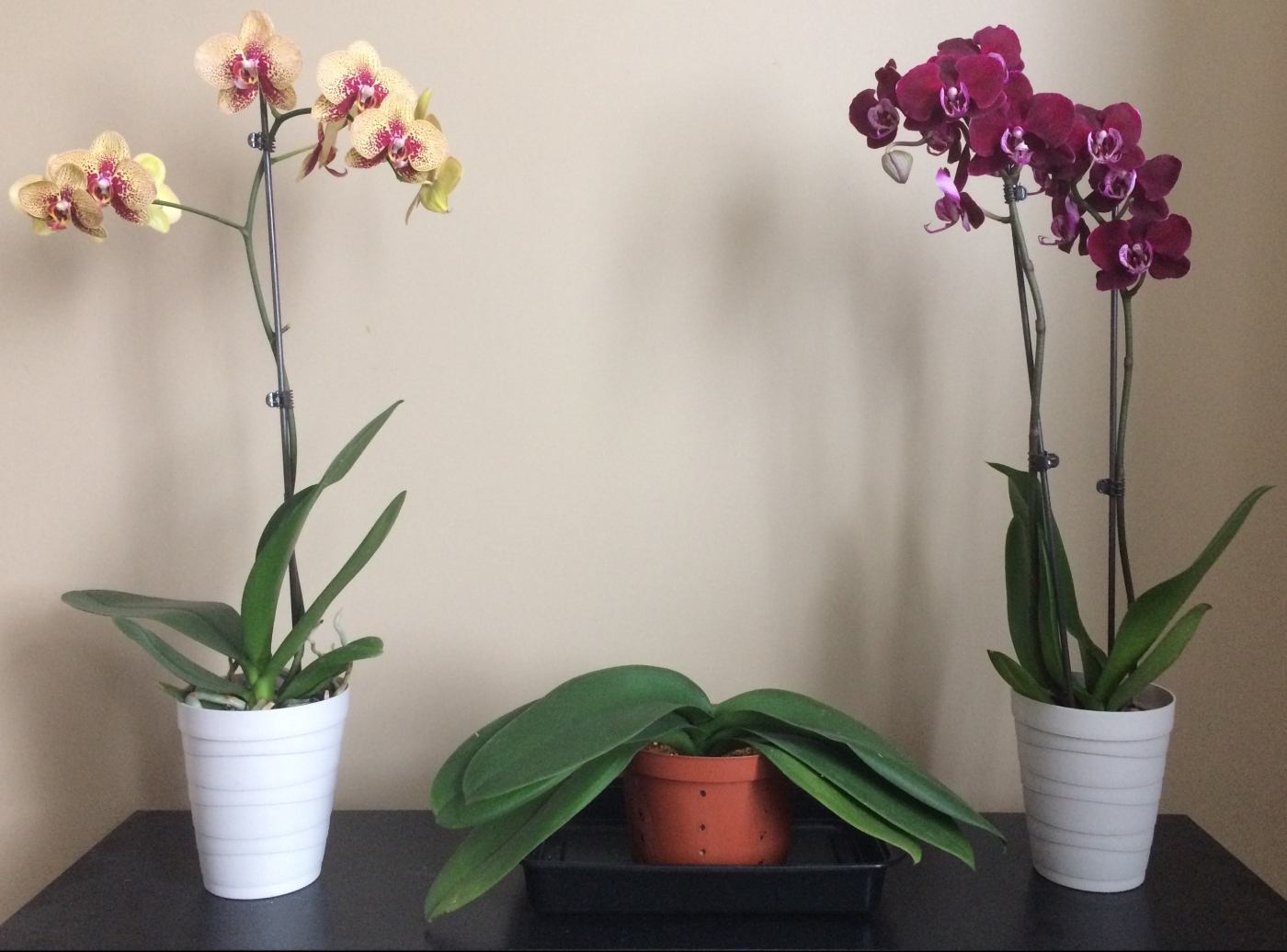 On the topic of orchids, you’ll probably see me post quite frequently. I am fairly new at keeping them. Over the past two years I have managed to kill two Phalaenopsis, so I’m learning. Right now I have three in my collection. All are grocery/department store “NOIDs,” i.e. there is nothing to identify what types of Phalaenopsis these are hybrids of.

These phals are mass produced to be inexpensive and in flower at point-of-purchase. For that reason, mass production growers don’t keep track of the genetic lineage of these plants. I can buy a mini phal for $10 at a grocery store or a standard phal for $20-25, depending on where I am—this is much less than the $50-100 phals that I used to daydream about when I was younger.

Cheap to buy is a good thing, it gets people involved and interested in the hobby of growing orchids.

NOID. Over the past little while, watching videos and reading blogs produced by the online orchid community, I’ve come to learn that these NOIDs have been maligned. Quite harshly sometimes. They’re seen as being pedestrian, common, and people who keep them in their collections aren’t “really” growing orchids. Someone even likened them to weeds. Well a weed is only an unwanted plant.

Meh, if you like the flowers who cares? My phals give me immense pleasure. I keep them in my bedroom. When I wake up I see their grace and beauty, and it sets me in a good mood for the day. The blooms last an incredibly long time, months if the conditions are good.

I think most people just want to know how to keep them alive so they bloom again. If you want to get down and learn about all the different species, genera, and hybrids, then by all means do that. If you just want to have some beauty in your house for a while, then do that.  In my dream house there would be a large soaker tub and a bay window with the windowsill full of masses of super large classic white Phalaenopsis.

However, mass production—so I’ve learned—has a darkside. To keep the price down they’re planted in not the best media for phals, typically straight sphagnum moss that is packed tightly around the roots. In a greenhouse, this potting method probably isn’t too detrimental. Plants tend to dry out very quickly in a greenhouse. The problems begin when we bring this plant home where there is less heat and humidity. In the winter my house is at 19-20˚C with 50% humidity. Very different from commercial greenhouses that can be at 25-30˚C with 70-80% humidity.

The dark part comes in when you know this is the case and you need to make the choice: flowers or plant? Do you keep the flowers for three months knowing that the root system is rotting away? Or do you repot and risk losing the flowers? Flowers that you might not see again for over a year.

I purchased George in September 2017 from a very popular Swedish furniture store. He cost me $20 and is a BIG phal and I adore big phals. The blooms on this plant lasted a solid three months. But I knew when I purchased, that not all was right with this plant.

George was in an opaque pot with no ventilation holes—not good for an epiphyte (air plant). When I pulled him out to see what the root ball looked like, I seen some decent roots on the sides but squishy roots on the bottom of the root ball. He was planted as I expected in straight sphagnum tightly packed. I chose to enjoy the flowers and try to salvage the plant afterwards.

Why? I reasoned that  if the plant already had rotted roots on the bottom at this point there was a 100% chance that there would be more in the centre of the plant. If I suddenly plunged the plant into, at least what I perceive as, “proper conditions” going into deep winter, I might have lost both the flowers and the plant. So, I may as well enjoy the flowers that is why I bought it in the first place.

Issues with George got more interesting as time went on.

When getting to know new plants and how to water them I will sometimes take a bamboo skewer and push it into the media. When the skewer is dry-ish, and the pot is lighter in weight than before, I water. I do this until I get used to the rhythm of the plant.

George’s skewer did not get dry. For a month, it was not just damp but wet. Wet + 19 ˚C + no root ventilation = ROT. Thank God for the low humidity of continental Canadian winters! If not for that, this rot could have traveled to the stem, which is a death sentence for monopodial orchids.

So I just let George sit there and veg for a while. We were going into the dark part of winter anyway and I don’t give supplemental light to my plants. Even if I did repot there would be no new growth until the days started getting longer again. I thought the best course of action would be to let him dry out.

I repotted George on December 30, and had a little bit of an archeology lesson in the process! I don’t photograph it, but I did draw a picture of what I found.

So, the growers who produced this phal, when he was being potted up they did not remove the old material. They simply tucked new sphagnum moss around the plant, aerial roots and all, and stuffed him into the next pot size up. This was done twice, when he graduated from a 3″ to a 4″ pot and then from a 4″ to a 5″. Very interesting. I can see how this method gets you a big mature phal quickly for very little cost.

But, after hacking away all the dead roots I now have a phal with the leaves of a 5″ phal but the root system of a 3-4″ phal. 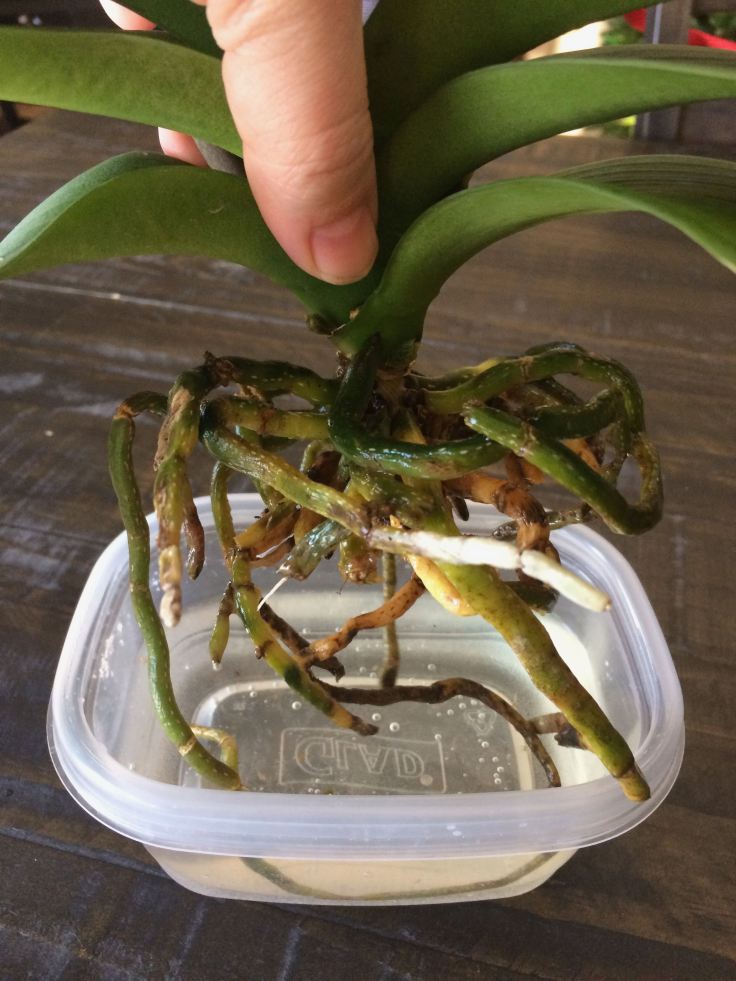 I think growers might know that their methods produce sickly plants, and—as predicted—I was back three months later for new phals. More profit for them.

Case in point two… and three: Meet Bert and Ernie! 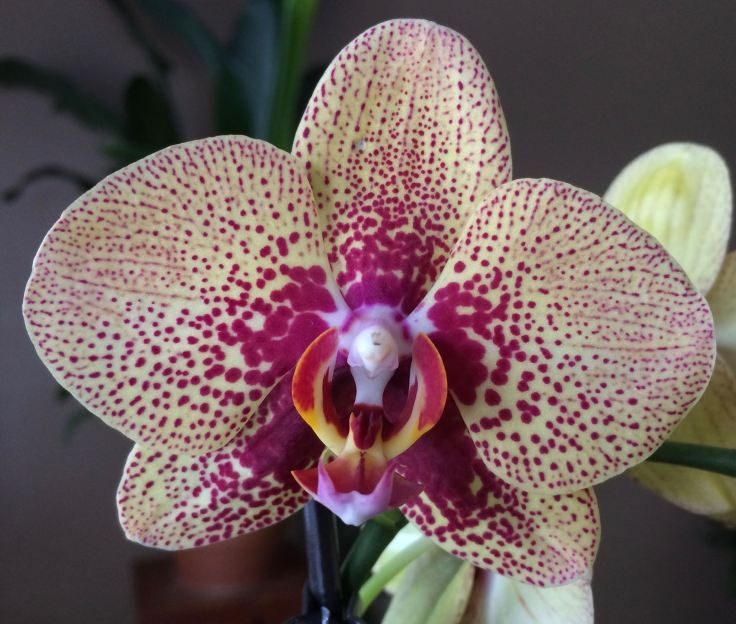 These were produced by a company you may have heard of called ‘Just add Ice’ (I would never water an orchid with ice). My husband got them for me on my birthday, because I kept telling him how I wanted to grow more orchids (more flowers = more happiness). So he got me these two very lovely NOIDs from the grocery store and I couldn’t be more pleased. They are SO beautiful! 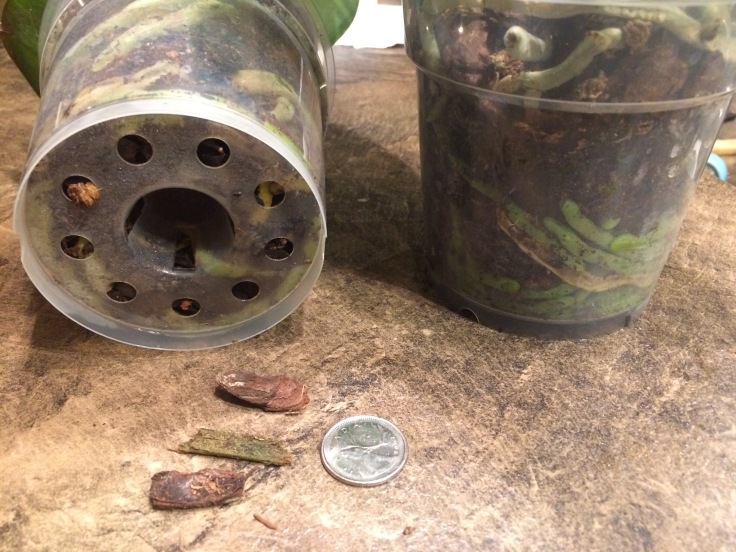 Their pot covers don’t allow for very good ventilation but they’re in transparent cone pots and in medium sized bark media which is promising. The roots on the outside look healthy as do the ones on the bottom. I get the feeling that this company really does care for their plants, and I’m hopeful that these will have a good future in my collection.

Over the last month Bert’s remaining buds opened (in contrast Big George lost his unopened buds, something known as bud blast). I’m going to keep these two as they are for the time being and repot them when they are out of bloom, which I don’t expect to be until April or May.

In the mean time, I have more orchids being shipped to me as I write! This time they’re “real” orchids from a professional high quality orchid grower. They get here tomorrow! So expect to see them soon.